The Islands of Fiji Have Stories to Tell

To most people, the mention of Fiji conjures up images of beautiful beaches, amazing honeymoons, and romantic south pacific vacations. And although all of this is true, Fiji has a much more fascinating history then most tourist brochures may lead you to believe.

Fiji consists of over 300 islands, and 500 islets. Of those, only about 110 are permanently inhabited. 87% of Fiji’s population lives on one of the 2 main islands of Viti Levu, or Vanua Levu, and of these people, 3/4 live on the coast of Viti Levu. 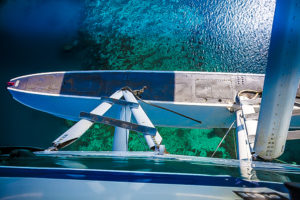 Needless to say, for those looking for the true “deserted tropical island” vibe, heading away from the main 2 islands is a necessity. The majority of the islands of Fiji were volcanically formed starting around 150 million years ago, and there is still some geothermal activity on the Eastern side of the archipelago on the islands of Vanua Levu and Taveuni.

For a more stable visit to Fiji, the Yasawa and Mamanuca islands on the Western side of the archipelago have become favorites of tourists.

Fiji was first settled in the second millennium BC by Austronesians and later by Melanesians, and also has some Polynesian influences.

According to Fijian myth, giant war canoes from Taganika (a place north of Egypt) brought the first settlers to Fiji. The leader of the sailors was a warrior chief named Lutunasobasoba and his general Degei. They sailed on the double hulled canoe Kaunitoni. According to legend, the armada was carrying a sacred relic called the Katonimana, which in Fijian means “Box of Blessings”.

Lutunasobasoba and his people set sail in search of a a mythological island with bountiful seas and rich land created by the Gods where the Chief ’s people could rest after years of wandering.  Half of the ships got separated during the journey, but the rest made it to Fiji, while trying to find safe passage into the waters of Fiji, the sailors found the Momi Passage that is still used today by large, ocean going vessels. Around the islands of around Matamanoa, Mana and Likuliku, the armada met with a storm. the high seas knocked the Katonimana overboard. Believing it was the will of the gods, Lutunasobasoba told his people to leave it be. It is believed that the box is still there, protected by 2 giant clams.

Degei, it is told, returned to the Mamanuca islands later in his life to try to retrieve the Katonimana. It is said he found the box, and a large diamond just outside of it. He took the diamond, and was immediately turned into a serpent with a diamond pattern on his head.

It is believed by some that he is cursed to live as a serpent forever, trapped in the Sawa-i-lau caves in the Yasawa island group. 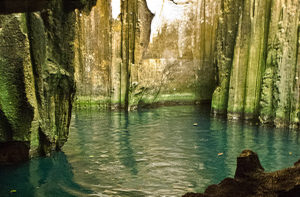 Speaking of, The Sawa-i-lau caves, in the Northern part of the Yasawa island chain is an amazing place to visit. The locals call this distinct limestone island, that rises 1,000 feet above sea level, “the heart of Yasawa” and there are many legends that go along with the caves located within.

Maybe connected to Degei, or maybe something altogether different, the caves are said to be the resting place of Ulutini. A legendary Fijian god, Ulutini has 10 heads, one of which is human, the other 9 are serpents. The human head is supposed to be so beautiful that it is almost to much for any mortal to behold.

Sawa-i-lau caves are also said to be the home of 2 fish named Dema Leka and Damu Balavu, as well as an eel named Donu. These three creatures are said to have lived in the caves forever without ever having grown or changed. They are protected by the magic of the caves.

If mythical and magical creatures aren’t your cup of tea, there is also a legend of Sawa-i-lau that is a bit more down to earth. The legend tells of a young chief who once hid his young love in the caves after her family threatened to marry her off to a rival chief. Every day he would swim into the caves to bring her food and be with her until they eventually made an escape to another island where they lived happily ever after.

Maybe this is where the legend of Sawa-i-lau’s pregnancy cave came from. There is said to be a cave within the Sawa-i-lau caves that any woman, regardless of her physical size, will become stuck in if she is hiding a pregnancy.

What other stories are awaiting you in the beautiful south pacific islands of Fiji? Let Turtle Airways take you on a day trip to unique and exciting locations in the Yasawa and Mamanuca islands so you can experience the stories the islands of Fiji have to tell, and make new stories that you can tell others.