Swimming With Manta Rays in Fiji 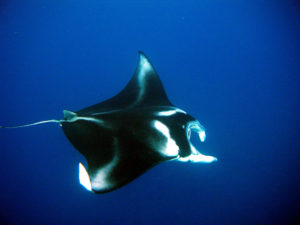 Manta Rays are mysterious gentle giants of the temperate waters of the oceans. They can grow up to 23 feet in width, and seem to glide effortlessly through the waters. If you are as fascinated with sea life as we are, then swimming with these incredible sea creatures is something you must try.

There is a legend in Fiji that long ago, the Naviti islands (in the southern part of the Yasawa Islands) was once one single island. A great warrior named Buli Balavu lived on the island of Naviti. There where also many animals and insects that lived on the island including a fierce warrior named Gata the snake. Gata started to take control of the island by killing off all the other animals. Soon all the insects and animals were hiding on the southern tip of the island. Buli Balavu wanted to save the animals from Gata the snake. So he took an arrow and shot the island breaking it into four pieces. Unfortunately the ants were still trapped on the island with the snake. The turtles came to help the ants but they had trouble navigating the currents so the manta rays stepped in and took the ants to safety. As they approach the southern island the waters became too shallow and Rocky for the manta rays. The lady octopus took the ants from the manta ray and delivered them to the shores of the southern island. As a reward for helping the ants the manta rays were given safe passage through the channels of the Naviti island group. To this day the manta rays return to the islands between May and October. 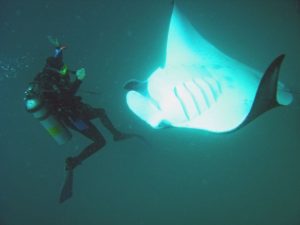 Swimming in the waters of Fiji with these amazing creatures is something everyone should experience in their lifetime. It makes one keenly aware of how alien and unknown our oceans truly are. These docile giants feed mostly off of plankton, and some small fish, and they pose no threat to humans. Although it is advised to be careful around them, as we do pose a threat to them. Touching a Manta Ray can remove mucous that coats their skin and protects them from disease.