There once was a time when real men were adventurers and explorers. They traveled out to parts unknown to seek their fame and fortune, and to experience the majesty of the natural world. 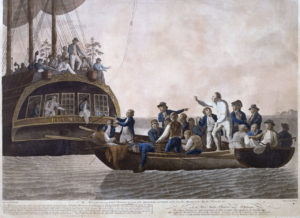 One such adventurer and explorer was William Bligh. Most people remember William Bligh from the Mutiny on the Bounty. Although TV and Movies like to portray Bligh as as a cruel tyrant of a captain, most historians agree that Bligh was, in fact, objectively gentler then the average captain of the era. Bounty‘s log shows that Bligh resorted to punishments relatively sparingly. He scolded when other captains would have whipped, and whipped when other captains would have hanged.

After the mutiny, William Bligh and 18 loyal crew members were put out to sea on a 23 foot launch. In that small vessel, Bligh managed to travel 4,164 miles to Timor through stormy waters. Even today, most people will tell you not to go out into open waters on a sailing vessel smeller then 30 ft (and that would be with 4-7 people… not 19).

It was in this small vessel that William Bligh became the first European to site, and record the location of Fiji’s Yasawa Island Chain.

The next European explorer to see the Yasawa Islands was Henry Barber who was sailing the British brig Arthur. During the same trip, Henry Barber discovered McKean Island (north of Somoa) before eventually sticking a reef off the coast of Hawaii and having the dubious distinction of being the Captain of the 1st recorded western shipwreck in the Hawaiian islands.

The Yasawa Islands were not charted, however, until American explorer Charles Wilkes arrived in 1840 as part of the United States Exploring Expedition (also known as the Wilkes Expedition).  The expedition consisted of 6 ships and included naturalists, botanists, a mineralogist, taxidermists, artists and a philologist. However, as peaceful as the expedition was supposed to be, they did have an incident on Malolo Island that resulted in deaths of Fijians and members of the expedition (including Wilkes nephew Henry).

In 1874, the Fiji islands became a British Colony. During this time, the Yasawa Islands were mostly left alone by westerners, although the United States did set up a few communications outposts on the islands during World War II. In 1970, Fiji became an independent nation. 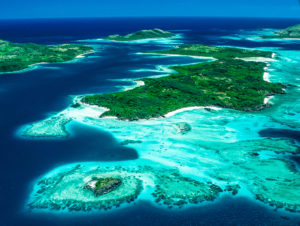 The policy of the Fijian government was that the Yasawa islands were closed to land based tourism. This policy was changed in 1987. In the 30 years since, small, boutique resorts have dotted the islands. These resorts are usually run by the local villagers, and are designed to be sustainable, and beneficial to the local people. There is no large build up that you would find in other vacation destinations.

If you are looking to visit a south pacific island for your vacation that looks much like it did when historical explorers like William Bligh, Henry Barber, and Charles Wilkes were exploring the area, then the Yasawa Island Chain is the place for you.

Unlike those brave explorers of times past, you don’t have to spend weeks at sea to get to Fiji and the Yasawa Islands. There is an international airport in Nadi that you can fly to from almost anywhere in the world. From there, you can book a seaplane transfer from Turtle Airways to take you to the resort of your choice in about 30 minutes. (that’s far better then the 4 hour boat ride from Nadi to Yasawa).