Nestled in a sheltered bay on Nanuya Balavu Island, Mantaray Island Resort looks across a narrow channel to Drawaqa Island. Every year, between the months of May and October, Gentle manta rays (one of the biggest fish in the ocean with wingspans up to 20 feet) cruise through the channel. Guests at Mantaray Island Resort are encouraged to snorkel in the channel and watch the manta rays glide through the water below them. It is a truly unique experience that offers an awe inspiring view of nature. 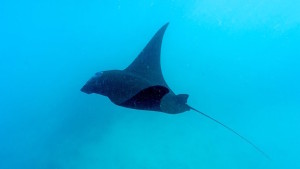 When the islands separated, the ants were left stranded on the same island as gata. The turtles rushed over to help the ants escape as the ants could not swim. Unfourtunatly, the turtles couldn’t stay on the surface for to long, and had to dive underwater before they made it across the channel. There, they saw the manta rays. The turtles asked the mantarays to go up to the surface and rescue the ants. The manta rays did just that. But before they were able to get the ants to the safe shoreline, they encountered rocks that they could not navigate. Lady octopus Sulua came and took the ants from the manta ray, and safely brought them to Korosamoa point at the northern tip of Nanuya Balavu. After making sure the ants were safe, Sulua went back to talk with Vonu the turtle and Vai the manta ray. Sulua proclaimed that as a reward for their selfless acts, the channel would always be a welcome place for manta rays, and the beaches of Nanuya Balavu would always be a safe place for the turtles to lay their eggs.

The accomodations at Mantaray Island Resort include a comfortable dorm for those traveling on a budget, or interested in a communal experience, or one of several bures (Fijian for villa). The bures are set back in the cool shade of the trees, yet still just feet from the sandy beaches. The bures range in standard from 2 to 3 coconut.

Behind the accommodations, and up a small hill is the resorts bar and restaurant. The added elevation of the seating area allows for magnificent views of the surrounding islands and bay. (There is also a lounge, bar and pizza on the available beach).