Captain James Cook and Fiji: Getting Around Fiji 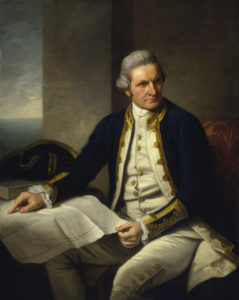 Researchers believe they may have found the sunken wreckage of famed British explore Captain James Cook’s renowned ship the H.M.S. Endeavour. Cook commanded the Endeavour from 1768 to 1771 while he mapped the uncharted waters of the South Pacific. After sticking the Great Barrier Reef and receiving damage, the Endeavour was repaired and returned to England in 1771.

In 1772, Captain Cook set sail again for the South Pacific in a ship named the Resolution. On this voyage, in 1774, Captain Cook landed in Fiji, and explored many of the islands. The name Fiji is credited to Captain Cook who combined the names “Fisi” that the people from Tonga called Fiji, and “Viti” that natives Fijians called their islands.

The H.M.S. Endeavour, however, had a different fate. It was sold off after Captain Cook’s 1771 return to England, and passed through many hands. It was eventually renamed the Lord Sandwich and used by England against the revolutionary colonists in what is now the United States of America.

In the lead up to the 1778 Battle of Rhode Island, British forces scuttled the Lord Sandwich in Newport Harbor. The Lord Sandwich (along with 12 other ships) were sunk in shallow waters to blockade the harbor from the French fleet that was coming to the aid of the rebellious colonists.

Researchers are planning a more extensive exploration of the location of the wrecks and “a more intense study of each vessel’s structure and its related artifacts”.

Of course, these days, you don’t need to spend years circumnavigating the globe on a Galion to get to Fiji. You can save a lot of time and just fly there. You also don’t need to waste time on a boat getting from the international airport in Nadi out to your resort island, you can fly there as well. 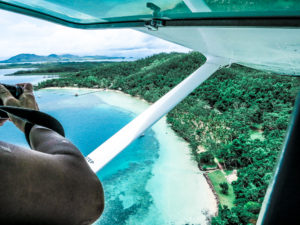 A boat ride from Nadi to the resorts in the Yasawa Island Chain in north western Fiji can take over 4 hours. 50 miles in open water can also lead you into some rough seas. If you are prone to seasickness, you might just end up spending your first couple of days in Fiji in bed with an upset stomach. But with Turtle Airways, our seaplanes can get you to the Yasawa Island resorts in about 30 minutes. Turtle Airways also offers several flights per day. So no matter what time you arrive in Nadi, there is a flight out to your resort shortly. No need to book a hotel in Nadi to wait for the boat that only leaves once per day (in the early morning).

If you want to celebrate Captain James Cook’s legacy of exploration while visiting Fiji, Turtle Airways offers amazing, low flying, scenic flights that will take your breath away with the beautiful views, amazing sites, and unprecedented vantage points. Captain Cook could only dream about seeing Fiji from the air, we can help make it a reality for your personal south pacific exploration.