Fiji’s Yasawa Islands are a magnificent untouched tropical paradise. The Fijian government has only allowed land based tourism in the Yasawa islands since 1987. As a result, the islands have managed to stay free of the large commercial developments that you tend to find at other vacation destinations. The resorts that you do find dotting the Yasawa islands tend to be small, locally owned sustainable resorts that meld into the environment.

Planning your tropical getaway to Fiji’s Yasawa islands really was a great choice, but you may be wondering where to go and what to do once you arrive. Here are some of our favorite things to see and do in Fiji’s Yasawa Islands.

As we mentioned, many of the resorts in the Yasawa islands are owned locally owned. That usually means there is a village nearby. You can usually set up a village visit with the resort staff and many resorts have scheduled trips to the local village.

In the village you will get to see first hand a way of life that has largely remained unchanged for hundreds of years. You may get to take part in an authentic Fijian Kava ceremony, and you may even get a better understanding of why Fijians have been voted the happiest people on earth for several years running.

Just remember that modesty is appreciated in Fijian villages and although your speedo’s and bikini’s are acceptable attire at your resort, you may want to trow on shorts or a sarong, and put a top on that covers your shoulders. Also, take your hat off when you enter the village.

In the northern part of Fiji’s Yasawa islands, you will find the Sawa-i-Lau caves. Called “The Heart of the Yasawas”, these ancient limestone formations were carved directly into the interior of the island by the waves.

Local legends say the Sawa-i-Lau caves are the resting place of the ancient Fijian god Ulutini. The legends also tell the tale of a young Fijian Chief who once hid his betrothed in the caves after her family threatened to marry her off to a rival chief. Everyday he would swim into the caves with food for her until they both were able to escape to a different island together.

The Sawa-i_lau caves are accessible by water, so bring your swimsuit and be ready to swim into the interior of this pacific island. The first cave is lit by a hole in the ceiling through which sunlight pours into the cave showing off its splendor.

If you are daring, you can swim through an underwater tunnel into the second, more secretive cave. This deeper cave is darker, and the space between the water and the top of the cavern is shallower.

The Naviti group of Islands 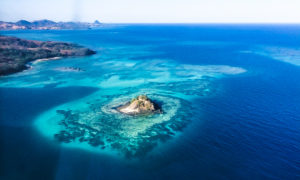 All the way on the southern side of the Yasawa Island Chain you will find the Naviti group of islands. These are made up of Drawaqa Island, Nanuya Balavu Island (also known as Manta Ray Island), Naukacuva Island and Narara Island. Legend says that these were once one island called Naviti Island. On this island lived a great Fijian warrior named Buli Balavu. Many animals and insects also lied on the island and they would fight over whose owned the island.One of the fiercest animals on the island was a snake named Gata. Gata tried to take possession of the island for himself by killing off the other animals. Buli Balavu saw this and took pity on the other animals. As the animals fled from Gata Buli Balavu shot an arrow into the island and shattered it into 4 separate islands. Gata was trapped on one island, and the rest of the animals had the other 3.

Unfourtunately, the ants hadn’t made it far enough away from Gata and they ended up being stuck on the same island as him. Since they could not swim, Gata decided to kill them so he could have his one island all to himself. The turtle Vonu, hearing the ants call for help, came to their rescue. Vonu tried to ferry all the ants across the channel between two of the islands, but turtles can’t stay on the surface long. Eventually Vonu had to dive down leaving the ants panicked on the waters surface. But when Vonu dove down into the water, he saw Vai (the Mantaray). Vonu asked Vai to help, and Vai swam up and collected the ants. Vai brought the ants as close as possible to the northern shore of Nanuya Balavu. There, Sulua (the octopus) took over, and delivered the ants to the top of Korosamoa point on the island of Nanuya Balavu.

As a reward for Vai and Vonus selfless act to help the ants, Sulua declared that the beaches of Nanuya Balavu will always be available for the turtles to lay their eggs, and the channel between Nanuya Balavu and Drawaqa will always welcome the Mantarays.

To this day you can swim with the mantarays in the clear waters around Nanuya Balavu (also known as Manta Ray Island).

When you go to Fiji’s Yasawa Islands, Turtle Airways is there to help you go where you want to and see what you want to. We have low flying scenic flights, resort transfers, and day trips that can bring you from one end of the island chain to the other. We also offer custom charters to let you do what you want how you want to. Give us a call and let us help you plan the ultimate Yasawa Island vacation.